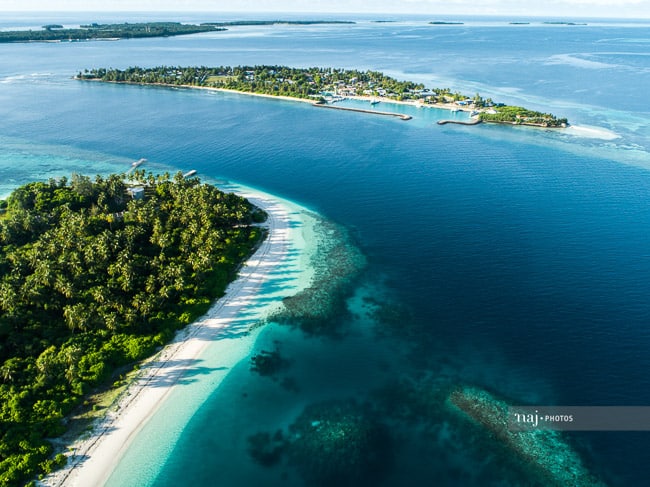 Our final island in the atoll was Maamendhoo, and the place we had been told was the capital of Laamu fishing….the big smoke(d fish).

It was also the first island in the atoll that wasn’t part of the outer ring reef, sitting alongside its two mates (Hulhimendhoo and Six Senses, Olhuvelhi) in the mouth of the channel…good spot for fishing, that.

How the island’s geography affects a village’s layout is hard to know for sure, but with access to open water (as opposed to ocean-facing reef) on all sides, houses are spread evenly across the entire island, leaving no forest or wetland areas as elsewhere in the atoll.

But, this doesn’t mean that every inch of Maamendhoo is not bursting with life…or, if you’re a fish, then not life…the other one…erm, un-life…fine, death. But, fishing is life in this part of the world.

Strolling round the island early one morning, the silence of the shoreline was broken by a school of masveriya, thrashing the water with rocks, sand, and palm branches to drum up some bait. (First time we’ve been able to witness this!).

Waiting nearby, over an outspread net, the rest of the crew had their little opponents cornered. They leapt about a bit, but within minutes they had been transferred to a floating container and whisked out to a dhoni waiting a few feet away off the island. The fisherman subsequently swam out after them and they were off.

Using the shade of the the joali-fruit trees to continue round the outside of the island, we came across a lively island kitchen, with a team of women preparing kulhi kaaja (sooo much nicer hot), while a couple more prepared havaadhu in cauldrons against the 5-star backdrop on the island opposite.

Further round, at the new harbour – and sighted from atop the Blossom Cafe – the mas dhoni eventually returned in the evening, dumping a slick of kandu mas onto the harbour. From here, they are trundled over to the Jupiter Fishing Village, which we’d already visited….

The Jupiter Fishing Village is where the fishermen’s friends go to get boiled, dried, smoked and rihaakuru’d in vast quantities. Oh, and when the fish prices aren’t great, they also make bricks for construction – the only industry other than tourism that outdoes fishing in the Maldives – though no fish were harmed in the making of these bricks.

It’s not only the fish who end up at Jupiter, however, with the company providing a break room so good that the whole community visits. We were treated to freshly caught and fried rehi (sooo much better hot) on Jupiter’s overwater jagaha.

Having observed life in Maamendhoo, we spent our last full day celebrating it over in Hulhimendhoo, where we took Dan’s birthday cake (sooo much better with a little salt spray). The  guys on the island normally swim across, but cake and cameras don’t swim. The island itself was once used to supply boats with their own life juice, but now boasts only an empty fuel tower, some old buildings and a rapidly eroding beach on the southern-eastern side.

We caught the ferry heading  back to Fonadhoo the next morning, bumping into more old-new friends as we concluded our life-affirming tour of Laamu.