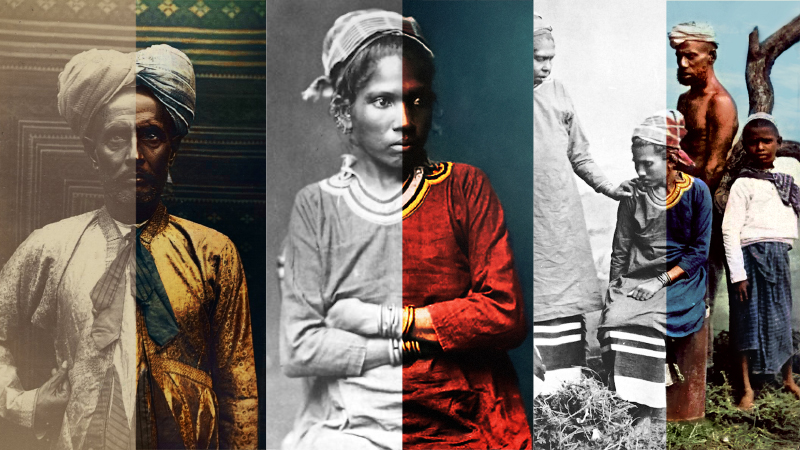 Anyone interested in Maldivian history (woah there, don’t crowd me) will be familiar with the photographs produced by German explorer Carl Wilhelm Rosset in the 1880s.

Colorising monochrome images and film has always been popular, and is increasingly easy to do – even Charles Dickens has recently gotten the technicolor treatment. After Naj was asked to colorise a family photo for a friend, she soon found herself bringing these famous old images to life. As she did, Dan got to reading about Rosset’s trip to Male’, and realised he could probably shoe-horn a bit of additional history to lend even more colour.

(You didn’t think you’d get away with just looking at the pictures did you…you don’t just do that all the time, do you??).

We’d like to think that these Victorian Dhivehin would very much appreciate the makeover, if not the colonial description (these were, of course, Nooradeen-ians at the time). They look less gloomy already (obviously), but also more relatable. Transported from that otherworldly grey-space of history, perhaps you’re now reminded of someone you know – a friend, a cousin, or that cranky 160-year-old lady next door?

As with most historical research related to the Maldives, none of this would be possible without the infinitely-impressive work of Michael O’Shea and Fareesha Abdulla, whose stuff can still (and should) be accessed via the Wayback Machine; they were assisted in this case by the meticulous Lars Vilgon, who translated Rosset’s articles from German. Any images not found on the Maldives Culture site are available in the archive at the National Library of France which we visited in order to do this story…online.

The title of the story, I hear you ask: ‘Rosset and Grey’ is taken from the lavish musical ‘Joseph and the Amazing Technicolor Dreamcoat’, in case you were interested [awkward silence]… there’s this whole bit where they list all the coat’s colours and eventually get to ‘…and chocolate and mauve and azure and lemon and russet [which is a sort of reddish brown] and grey’. Once I’d thought of it – as I do disturbingly often – I couldn’t get it out of my head.

(Who says a joke isn’t funny if you have to explain it?).

Incidentally, prior to Rosset’s 1885 visit, the most colourful description of the Maldives had come from Francois Pyrard, in the early 1600s. Just two years after Rosset took his photos, the Frenchman’s account was finally translated, a little further along the colonial spectrum, by an Englishman named Albert Gray (erm…no relation).