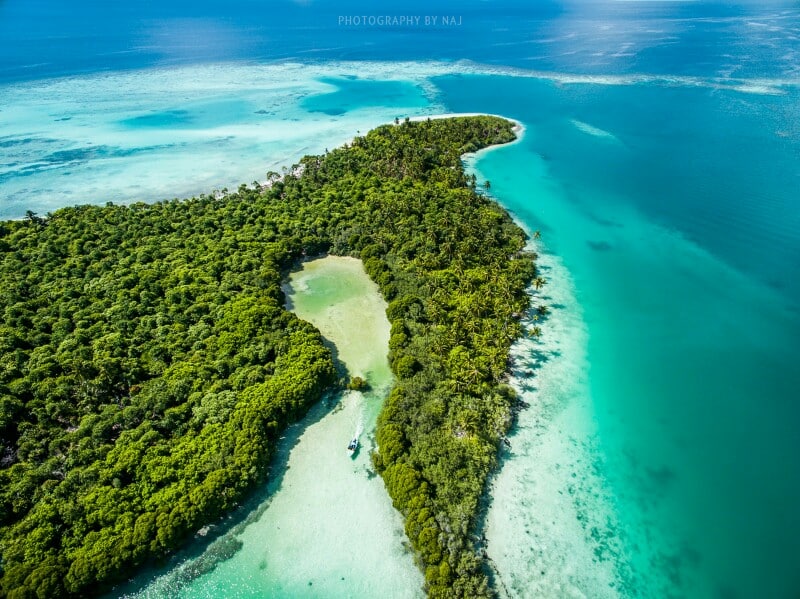 A slightly underwhelming week on oir trip was rescued by the discovery of perhaps the most interesting uninhabited island we’ve been to.

Just a short boat ride from Faresmaathodaa, our friends there were more than happy to help us explore it.

The island is called Dhigelaabadhoo, a obscure C-shaped piece of land lying on the SE corner of Huvadhu atoll. This curious creation wraps around on itself to the north, adding unusual mystery and making the island seem like something out of a pirate fantasy.

(If you’re last visit was kinda crap, there is a place still on the map…)

Approaching from the lagoon, the natural bay tempts you in before revealing a second, smaller, cove that had been completely invisible before. We turned the dinghy into it and had barely had time to pick out pirate names before we saw another even smaller inlet, almost hidden by two trees which appeared to be growing out of the water.

(Beyond the cove that nobody sees, behind the gate of swimming trees…)

If there isn’t hidden treasure back there, there really should be. As we eased the boat past the trees we could just imagine a ragged crew of scoundrels having left their ship in the lagoon to stash their booty on the island…hey, everyone needs to let off a little steam after a long time at sea!

(There lies a treasure that can’t be bought, unless you’re developing a resort…)

The area is actually used by lucky locals for picnics, and evidence on the opposite side of the bay suggests that raiveriya once lived on the island, tending to the coconut trees.

They’re long gone, but surely the pirates will be back for what’s theirs at some point.