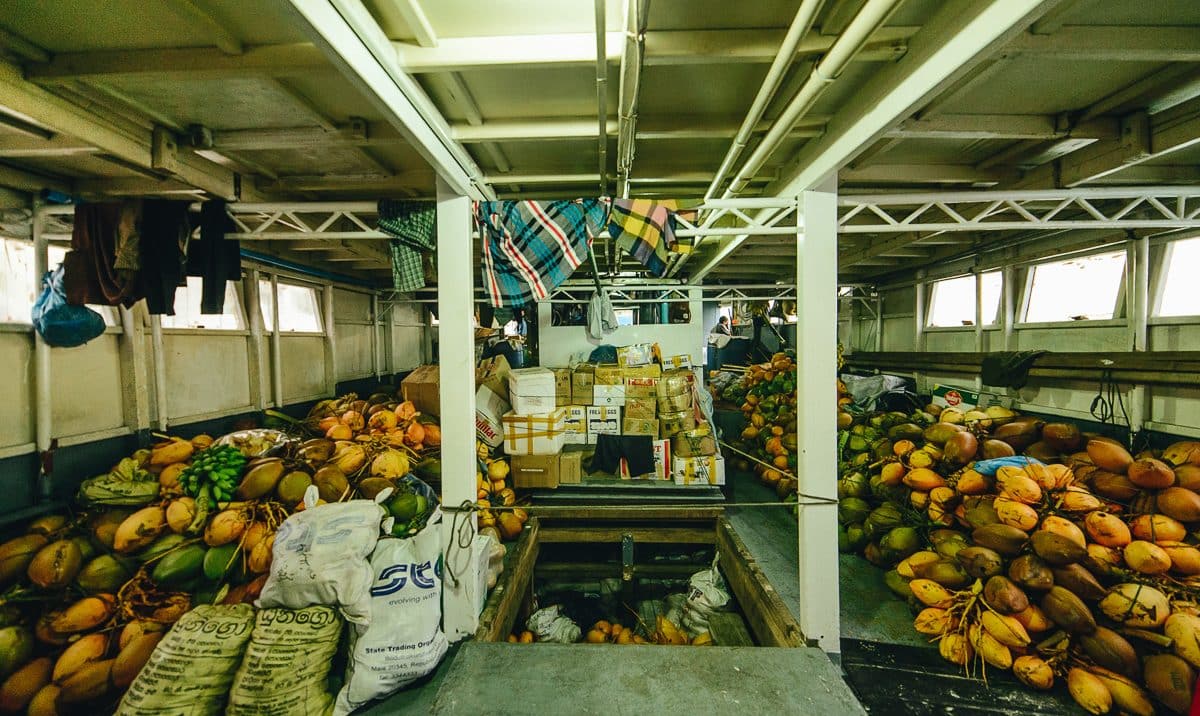 We arrived in Gaafu Alif Nilandhoo early this morning, after an 11 hour trip from Feydhoo. Our companions on this voyage were mainly barrels of kerosene, boxes that almost definitely didn’t contain what they said they did (not even Ashfag drinks that much Milo), and lots and lots of coconuts.

Boarding the New Line cargo ferry bound (eventually) for Male’ at around 8pm, we were immediately shown up as novices on such a trip. No mats, no pillows, no cardboard mattress. One particularly senior passenger was so surprised by our presence he performed a full 10-15-seconds-from-3-feet-away stare, before setting out his bedding, circling a couple of times and settling down – like an old cat in a mundhu.

We were advised to head up to the airy top deck, handed a pity blanket to spread out on, and had to make do with slippers for cushions as and the stars as a blanket…so, not that bad.

Just after 9pm the lights of Hulhumeedhoo passed by on our right on the way into the Equatorial Channel. Fuvahmulah twinkled by on the same side just before 11pm (we waved but no one saw) and by 3am we rolled gently through the Gadhdhoo Kandu and into Huvadhu.

Footwear for headrests and a cockroach that won’t quit were now turned to our advantage. Still wide awake, and stepping forward away from the glare of the bridge, an incredible site awaited. The lights of the atoll’s inhabitants could be seen clearly, like half a dozen mini sunsets from what must have been 30km away across the lagoon.

Our voyage broke on the shores of Dhaandhoo at the same time as the sun, around 6am. Sweet milk tea and jam sandwiches were served in the hold as wheelbarrows and sing-song accents rolled up to load and unload on the harbour. A final trader, flapping in a green dress, came just as the boat was leaving, forcing the captain to turn back despite the grumbles of the crew.

Twenty minutes later we reached Nilandhoo, the next island along the reef. We interrupted the captain, busy choreographing the latest troop of wheelbarrows from the top deck, to hand over our MVR150/$10 (each).