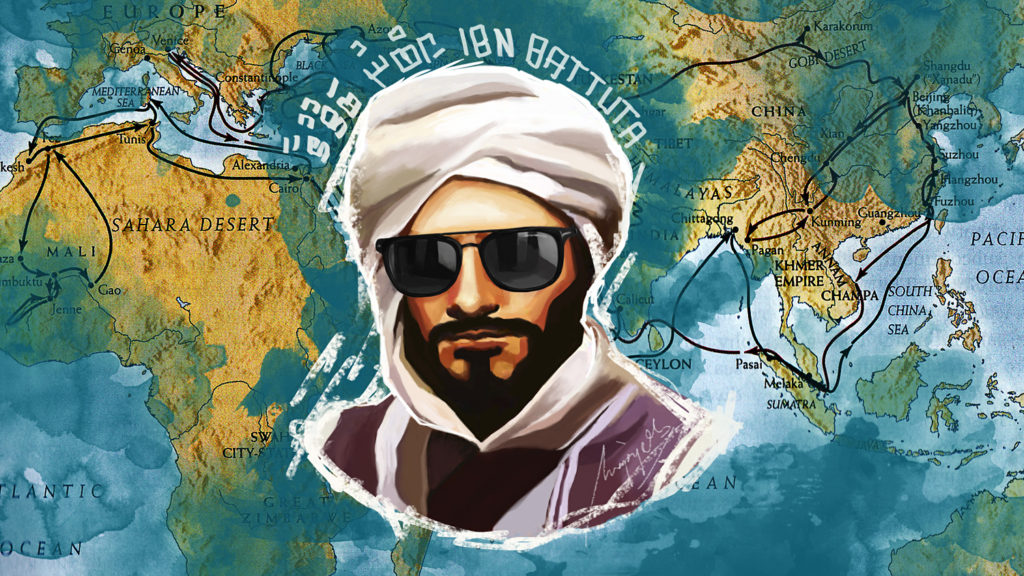 The Moroccan explorer Ibn Battuta travelled throughout the Muslim world in the 14th century, providing the first detailed accounts of the Maldives along the way.

Despite 700 years having passed, elements of Battuta’s tales draw parallels with the modern country, from political intrigue and conspiracy to many many marriages.

But how would his story sound given the 21st century media treatment?

Rumours that the traveller from Tangier had decided to leave the country just days after his return from the Malabar coast were confirmed this morning, with Battuta addressing journalists at the Sultana’s jetty.

“Having returned to the Maldives to see my newborn son, I find that the the continued suspicion of leaders in Male makes a prolonged stay impossible,” explained Battuta.

He revealed that permission to depart had been requested after noticing the Wazir Abdallah had been closely watching his movements following his summons to the capital from Kannalus last week.

Battuta’s return earlier this month came as a surprise to many. The eligible adventurer’s previous 18 month stay ended in discord following a marriage-spree that included unions with multiple members of the royal household.

In an explosive interview with Eyru Habaru prior to his first departure, he accused the country’s leaders of refusing to allow his departure, as well as paranoia and jealousy.

“After these marriages the islanders came to fear me, because of their weakness, and they exerted themselves to turn the Wazir against me by slander, until our relations became strained.”

“He was afraid of me and used to say ‘This man will without doubt seize the wazirate either in my lifetime or after my death.’ He was constantly making enquiries about me and saying ‘I have heard that the king of India has sent him money to aid him to revolt against me’.”

Public spats with the Wazir Sulayman became common, with insiders suggesting that the berber was only saved by his standing among Indian sultans. Battuta has repeatedly denied reports from India that he had since plotted to send an army to the Maldives with the help of the Malabari Sultan Nasir ad-Din.

Well-wishers at the jetty today showered Battuta with gifts, bringing fine silks and jewels.  The Wazir Abdallah is reported to have given Battuta 400,000 cowrie shells (1 gold dinar) as a leaving gift, though his office was not responding to notes scratched onto palm leaves at the time of press.

The Mecca-trained qadi first arrived in the Maldives in 1343, spending in time Fuvahmulah and the capital before returning to India’s west coast where he previously fought alongside the Sultan of Honnavar.

After gaining significant experience during 20 years travelling throughout the Umma, the 41-year  old was credited with bringing a number of reforms to jurisprudence in the two thousand isles. His changes included introducing floggings for those who failed to attend prayers, and amputation for theft.

Summarising his time in the Maldives this morning, Battuta praised the people, calling the isles “one of the wonders of the world”.

“The people of the Maldive Islands are upright and pious, sound in belief and sincere in thought; [but] their bodies are weak, they are unused to fighting, and their armour is prayer,” he said, recounting the time a man passed out when a ruling of amputation was delivered.

When asked about his multiple marriages in the Maldives, including 2 wives in 70 days while in Fuvahmulah, the judge pointed out that marriage in the islands was made easy by small dowries and “the pleasure of women’s society”.

“When ships arrive, the crew marry wives, and when they are about to sale they divorce them. It is really a sort of temporary marriage,” he said.

In a parting shot, however, he chastised the country’s women. Recalling his struggles with the female community, he suggested that having a woman – the Sultana Khadija – was “a strange thing”, adding that it was her husbands, the wazirs, who exercised the real power.

“The first bad custom I changed was the practice of divorced wives of staying in the houses of their former husbands, for they all do til they marry another husband. I soon put that to rights.”

Despite noting that the qadi was routinely respected and obeyed in the country, he confessed that his authority over women did not extend beyond his numerous wives.

“I tried also to make the women wear clothes, but I could not manage that,” he told those at the jetty.

Questions fielded by women naked from the waste up were ignored, with the judge complaining that even the sultana does not cover up appropriately.

Asked what he would miss most about the Maldives, Battuta said the cleanliness of the people and the orchard-like lanes, before adding: “The coco-palm is an extraordinary tree”.

Asked what he would miss the least, he said the “inevitable fever” and female nudity.

*Translations used for the compilation of this article came from H.A.R. Gibb’s  ‘The Travels of Ibn Battuta’. All quotes, barring paragraph three, taken directly from this text.